If anyone seriously doubts the impending apocalypse then they should look no further than Buzzfeed, the brain-destroying webpage that is slowly, gradually killing human civilization one list at a time.

Unfortunately, I’m probably not going to be able to stop this dangerous tide of philistine listophilia. Instead, I’ve decided to join in, so here are Nine AWESOME FACTS about English social history that will, like TOTALLY BLOW YOUR MIND!

1. This house in Hampshire is older than the United States of America.

In fact, it’s older than the USA and Germany put together. And it’s not that unusual, either: most English villages  have surviving houses – the houses of ordinary people – from the 17th century and earlier. Yep, in England we have peasants’ houses that predate the foundation of the USA. In fact, we’ve got tonnes of ‘em (this one, which dates from the 16th century, is in Kings Somborne in the Test Valley).

2. This hedge was around in 1066. It’s one of England’s ancient hedgerows – everyday features of our landscape that we drive past and ignore every day and which are just astonishingly old. It was dated by an amateur historian who counted tree species – roughly one new type of tree will colonize a hedgerow every hundred years, so by counting the species you’re adding up the centuries. Other hedges can be dated by a combination of species analysis, archaeology, and archival research.

In fact, the oldest securely dated hedgerow in England is ‘Judith’s Hedge’ near Huntingdon, which has been around since the late 11th century. In other words, an unassuming field boundary in East Anglia is older than the USA, Germany, and Spain put together. And it’s widely accepted that many of our hedgerows are much older even than this.

3. Some of our town street plans were laid out by Alfred the Great. Winchester’s distinctive grid pattern is one example, as are Wallingford and Shaftesbury. 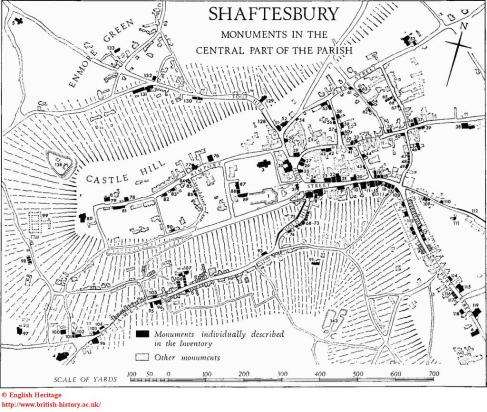 The towns were created as defensive points against the Danes and their super-efficient grid-plans have survived to this day. So Alfred didn’t just invent the navy, extreme baking and, er, England. He also invented Milton Keynes. Way to go, son!

4. In terms of GDP per capita, England was richer in 1600 than either India or China were in 1970. According to figures compiled by the late Angus Maddison it was only in 1978 that China overtook that level, and 1981 that India did. The temperate climate, the variety of the landscape, and the ease of river and seaborne transport have always given England natural economic advantages, and by the late 17th century southern England was one of the richest parts of the world, boasting productive farms and an efficient market economy. Amazingly, this was before we had bankers or even the National Lottery. Of course, it wasn’t distributed very evenly, so despite the wealth, England in 1600 still had a massive poverty problem…

5. … which means it’s a good thing that England was also the first country to instigate a national system of social welfare. The Elizabethan Poor Laws ordered that each parish tax its wealthier inhabitants and transfer the money to its poor. Here’s an example of some of the stuff it did in the early days. It’s a payment of two shillings and sixpence for a ‘parr of shooes’ to a man called John Barwicke of Troutbeck (in the Lake District).

By 1650s the vast majority of parishes were taking this legislation seriously, making this the oldest national system of social welfare anywhere in the world. It is, then, probably also not coincidental that…

6. … England was also the first major country to stop having famines, permanently. In fact, the last English famine was in 1623. That’s nearly four hundred years ago.

7. In the 18th century, most of the American states were in Kent. When the Crown created new colonies, it often maintained an interest by granting them to colonists in ‘free and common socage of the manor of East Greenwich in Kent’.

The same was applied to Bombay when it was granted by Charles II to the East India Company in 1668, making it, in legal terms, the largest city in Kent. This didn’t, however, apply to all of the original Thirteen Colonies of America. Maryland and Pennsylvania were technically in Berkshire, while Georgia was poshest of all – part of the manor of Hampton Court in leafy Surrey.

8. The English Common Law is now the basis of the legal systems of a third of the world’s population. That’s around 2.3 billion people. This is amazing, when you consider that it became fully institutionalized in the 12th century, in order to keep the peace amongst about 3 million medieval English folk.

9. We really are a nation of migrants. Not just the waves of migration that have landed on our shores – the ancient Celts, the Anglo-Saxons, the Vikings, the Huguenots and the recent migrants from the former Empire and beyond. But even on top of all this, most people in our history have moved at some point, usually within their county, but some to London and the other big cities. In fact, two surveys of the villages of Clayworth in Nottinghamshire in 1676 and 1688 show that – amazingly – most of the population had moved on between those dates.